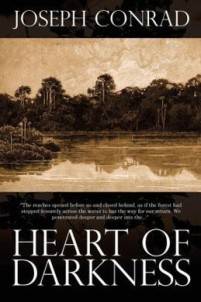 Joseph Conrad was a multifaceted man: he was a sailor and, with the same passion he loved the sea, he was a writer.. How could a man, who was Polish and learnt English as adult, write so fluently and with this variety of words? This is one of the most fascinating feature of this novel, along with its characters.

Marlow, who was later considered as Conrad’s alter ego, was the main character of the novel which is considered as the forerunner of the MODERNISM. “Heart of Darkness” has a matrioska frame: the reader has different degrees of narration, so he can perceive the plot from different point of views. Few physical descriptions leave the place to a sort of psychological journey. The journey which was told by Marlow to some friends of him during a common chat in a late Victorian afternoon in a yatch on river Thames. Marlow described his juvenile journey in the “heart of darkness” (Congo) when he worked as captain of a steamer for an Belgian Company. He started his journey in search of adventure: he was excited to visit Africa, he left London and then Brussels, the city in which the Company had its headquarters, feeling the imperialistic spirit of his time. The journey, described with huge amount of symbols which connected Marlow to the darkness nature of the environment but also of himself, changed him a lot. The meeting with Mr. Kurtz modified the way in which Marlow had perceived Imperialism since then: Kurtz represented the evil side of each man, destroyed by the desire of power.

The description of the forest and the river in Congo was gloomy and gothic sometimes, following Marlow’s feeling. The frame, very similar to Mary Shelley’s “Frankenstein” but also to Coleridge’s “The Rime of the Ancient Mariner” let the reader able to understand the common features between three works so different in their genre. As Coleridge’s mariner and Shelley’s Captain Walton, Marlow had his duty too: he had to tell the dangers of losing our soul in search of power and richness, he had to speak about the real face of Imperialism and the risk to become inhuman as if it was normal. This could be a key for reading the novel as a critique to European colonialism. If you are more interested in psychology, “Heart of Darkness” is full of Freud’s theories about Ego, Superego and Id (that could be compared to each station . outer station, central station and inner station) Marlow met during his travel along the river.

If you consider “Heart of Darkness” just a “book for students” you’re making a mistake: this novel is much more than this… let us consider that Francis Ford Coppola’s “Apocalypse Now” was inspired by this great Conrad’s masterpiece!

Don’t waste your time… and enjoy your reading!